One of the pieces in the puzzle of chronic Lyme disease is environmental. Toxins in our bodies and homes can weaken our immune systems, increasing our chances of becoming ill and making recovery more difficult.

This week, I welcome prolific health and holistic wellness author Connie Strasheim to Lyme Light Radio. Having overcome chronic Lyme disease herself and written several books, Connie brings a wealth of knowledge to Lyme Light Radio. We are eager to hear about detoxifying our bodies, homes, and more!

My interview with Connie airs this Wednesday, July 30, at 4PM ET on http://www.transformationtalkradio.com and WBLQ 1230 in Southern New England. You can listen live on iTunes or at http://thedrpatshow.com/shows/mak-140730-strasheim.mp3.

Connie Strasheim is the author of seven books on holistic wellness, including Lyme disease, cancer, detoxification, nutrition, chronic illness and spiritual healing. Some of her books involve ghostwriting for top integrative and naturopathic medical doctors that have had success treating serious chronic illnesses that conventional medicine has failed to adequately treat. In addition, she is a copywriter and physician podcast interviewer for the Alternative Cancer Research Institute, an organization dedicated to alternative and integrative treatments for cancer.

Her most widely recognized books are on chronic Lyme disease, including the bestselling, “Insights into Lyme Disease Treatment” and her most recent book, “Beyond Lyme Disease: Healing the Underlying Causes of Chronic Illness in People with Borreliosis and Co-Infections.”

Connie also lectures on health and wellness topics and volunteers as a healing prayer minister at her local church in Colorado. She hosts nationwide prayer conference calls for those with chronic illness, as she believes that Jesus Christ still heals today, both supernaturally as well as through medicine.

She is a strong communicator and leader, and enjoys helping people to become whole, in body, mind and spirit.

Children and teenagers spend more hours outdoors and in the woods, on average, than most adults. All this time spent in nature leaves younger people vulnerable to tick-borne illnesses and Lyme disease, the fastest-growing infectious disease in the United States.

Listeners remember when we followed John Donnally of the TBDA on his 3,000-mile bike trip across America to raise awareness of the Lyme epidemic. This week, John returns to the show to tell us about TBDA’s new Junior program, which will help support young folks struggling with tick-borne illness. John will educate us on how we can help children and teens struggling with these chronic illnesses.

John returns to the show this Wednesday, July 23, at 4PM ET, followed by an encore episode from his bike trip last fall. You can listen on WBLQ in Rhode Island and at http://www.TransformationTalkRadio.com. You can find the interview on iTunes or listen now at http://thedrpatshow.com/shows/mak-140723-donnally.mp3 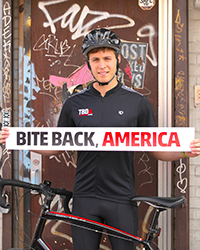 Born and raised in Madison, N.J., John Donnally attended the Morristown-Beard School from 2004-2008 where he competed in hockey, soccer and lacrosse. John first began suffering from Lyme-related symptoms in the fifth grade but did not gain an official diagnosis until 2003.
Throughout high school John was healthy and only experienced mild lingering symptoms. As captain of his lacrosse team, John was named first team all-conference and first team all-county. He continued his talents at Colgate University, but during this time, he also began to experience new and intensified symptoms, including cascading floaters in vision, neck pain, joint pain and tendonitis. In 2011, John tested positive for Lyme once again and started treatment immediately.
In May 2012, John graduated from Colgate University with a degree in English Literature and began working as a sales consultant in New York City. While working, John felt a strong desire to take action against Lyme and do something that played a lasting role in his life. This desire inspired him to join the Tick-Borne Disease Alliance and launch Bite Back for a Cure, a national grassroots campaign to build support for the fight against the devastating impact of tick-borne diseases. This summer and fall, John is biking across the country to Bite Back against tick-borne diseases and build support in the fight against the devastating illnesses.

Dr Richard Horowitz and I are featured in an article published today by Experience Life Magazine! I share my own history with chronic Lyme, and the integrative medicine that helped me to get well. You can read more at http://experiencelife.com/article/beating-lyme-2/

In the Southern US, the growing epidemic of Lyme disease has been ignored by the medical establishment. However, Lyme disease is present and growing in the South, and many people are suffering. This Wednesday, Melissa Bell of the Florida Lyme Disease Association will join me on Lyme Light Radio to talk about the work of FLDA, and how they are raising awareness of Lyme disease and tick-borne illness in the state of Florida.

In the second half of the show, we have a special treat! Musician Alisa Turner will play for us. I first heard Alisa’s music at the Ticked OFF: Lyme in the South Music Festival in Jacksonville, FL. Once bedridden with advanced Lyme disease, this woman is a true survivor bringing us her gorgeous music. I can’t wait to introduce her to my audience. You do not want to miss her performance!

Melissa and Alisa will join me on Lyme Light Radio this Wednesday, July 16 at 1PM PT/4PM ET. Tune in on WBLQ in Southern New England and http://www.transformationtalkradio.com. Both interviews are available on iTunes, and you can also listen to Melissa’s interview at http://thedrpatshow.com/shows/mak-140716-bell-30.mp3 and Alisa’s music at http://thedrpatshow.com/shows/mak-140716-turner.mp3 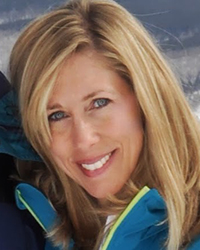 Melissa Bell was raised in West Palm Beach, Florida. After receiving a Bachelor of Science degree in Finance from the University of Florida, she worked as a Business Analyst for NCR Corporation in Atlanta, Georgia, Liberty Corner, New Jersey and Orlando, Florida. Melissa returned to the University of Florida to obtain her Juris Doctorate degree, with Honors. After graduating from law school, Melissa worked for two Jacksonville, Florida law firms, collectively for a total of 12 years: Brant, Moore, Macdonald & Wells and McGuireWoods, specializing primarily in commercial and employment litigation.

Unfortunately, Lyme Disease has profoundly impacted Melissa’s family. After years of searching for answers, Melissa and her children were finally diagnosed with Lyme Disease and multiple other tick-borne infections. Melissa saw first hand the struggles that so many other Florida families face due to poor awareness in the state, faulty testing, and flawed treatment guidelines that fail to take into account the complexities of treating late stage, disseminated Lyme Disease, particularly in the presence of co-infections. Through personal experience and outreach to others, Melissa observed that patients in Florida are routinely condemned to unnecessary suffering because they are denied the opportunity for early diagnosis, along with safe efficacious treatments.

Melissa founded Florida Lyme Disease in 2013 in an effort to raise awareness throughout the state, and to provide leadership for statewide advocacy initiatives. Melissa is excited to partner with the talented, passionate Northeast Florida Lyme Association team to improve Lyme Disease education, awareness and surveillance in the State of Florida.

Through tragedy, through loss, through sickness and losing it all, Alisa Turner still sings.

Alisa has been writing and performing from the early age of 11. Though she admits at the time there wasn’t much worth listening to, she did embrace those early years trying to conquer the basics of how to write a good song. Entertaining an audience is a must, photo shoots and sparkly dresses are quite the delight, but at the end of the day she wants to be known for and remembered as a respectable songstress. “When a song can be stripped down to its most basic and raw form and still be great, everything else is just a bonus” says Turner.

She leaves it all on the stage. Vulnerability just scratches the surface of what you’ll see when you witness her perform. She takes all that she has endured in this life and pours it into her eloquent piano ballad driven melodies with determination in connecting to each member of the audience.

It’s been an uphill battle since tragically loosing her father, being bedridden for three yrs due to Lyme disease, and giving birth to her son London who lived only 71 minutes in her arms. But instead of focusing on what has been taken away, she rejoices for all that she has been given. It hasn’t been easy for Turner as she will truthfully tell you but, surrendering to it all isn’t an option for this musical warrior.

Alisa has worked with Producers Robbie Seay (of the Robbieseayband), Don Chaffer (of Waterdeep), and Songwriter Cary Barlowe (of Taylor Swift/Carrie Underwood/Lady Antebellum). She has toured and or shared stages with Brandon Heath, Michael Gungor, Shane Alexander, Tenth Ave North, Shane & Shane just to name a few. Her music was used by Stacey Tookey on the TV Show, So You Think You Can Dance which allowed her to spend two weeks at the #1 spot on iTunes Singer/Songwriter Chart. She was also featured on Toby Mac’s Album, Portable Sounds. In her own words “It truly took blood, sweat, tears, and many nights sleeping in the car across this beautiful country to have such wonderful opportunities. The difficulties have made me appreciate even the smallest of successes like the first time I received an iTunes check, the first time I was paid for a show, and the first autograph I ever signed.”

In person she comes off as a quiet and gentle spirit, but on stage she is set free. An pin dropping unforgettable strong soaring voice comes out of this girl full of passion and commitment to each note she plays and lyric she sings. She takes you on a journey all your own, capturing your attention and captivating the soul. Alisa Turner is using music to make intimate heart-­to-­heart connections where ever she goes. And it’s all as natural as breathing.

Lyme disease can have mysterious and frustrating effects on the brain and nervous system, but biologists are learning more about the causes and effects of chronic Lyme and other tick-borne illnesses.

This week, I am honored to welcome Dr. Dietrich Klinghardt of the world-renowned Sophia Health Institute to Lyme Light Radio. Dr. Klinghhardt exemplifies masterful knowledge of Lyme and associated infections, and he is gracious to share with us his knowledge of the reasons that some of us get sick, and the steps we can take to get better.

Dr Dietrich Klinghardt MD, PhD, is Founder of the Klinghardt Academy (USA), the American Academy of Neural Therapy, Medical Director of the Institute of Neurobiology, and lead clinician at the Sophia Health Institute, located in Woodinville, Washington. He is also Founder and Chairman of the Institute for Neurobiology (Germany) and (Switzerland). Klinghardt Academy (USA) provides teachings to the English speaking world on biological interventions and Autonomic Response Testing assessment techniques.

Klinghardt has lectured at the universities of Illinois, Utah, Freiburg, Adelaide, Capital University (Washington DC) and others, and the medical schools of Geneva and Zurich. Between 1996-2005 he was Associate Professor at the Department of Applied Neurobiology at Capital University. He is regularly invited to teach workshops at the prestigious Medicine Week in Baden-Baden, Germany and the International Lyme and Associated Diseases (ILADS) conferences. Among his books is the groundbreaking Psychokinesiology A new Approach in Psychosomatic Medicine, on muscle feedback-guided psychotherapy. Many of his teachings, manuals, seminar DVD’s and clinical tools are available through his website http://www.klinghardtacademy.com.

You can tune in to this historic interview on Wednesday, July 9 at 1PM PT/4PM ET, on WBLQ in Southern New England and http://www.transformationtalkradio.com.

Out of the Woods; Healing Lyme disease, Body, Mind & Spirit